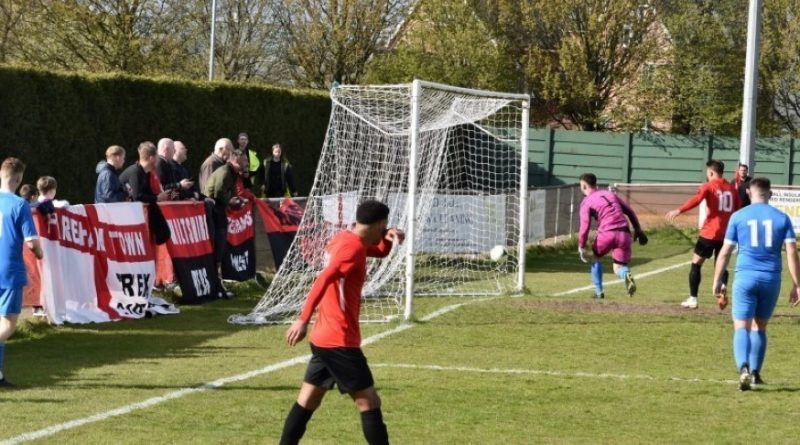 FAREHAM TOWN ended their home campaign in style and continued good recent form as they thrashed already relegated Amesbury Town on Saturday, beating them twelve-two on a brilliant afternoon of football at Cams Alders. In spring sunshine it was a thrilling match of fourteen goals that summed up the Creeksiders’ season who were outstanding in attack but vulnerable in defence, putting a dozen past a stand-in away goalkeeper but still conceding two with the match over as a meaningful contest before half time.

The Creeksiders started with a series of half chances as they piled forward against an injury-hit away side, taking the lead in thirteen minutes after Charlie Cooper’s cross was put into his own net by Amesbury defender Billy Drever at the far post. Further chances came as Jack Breed fired over from an angle and Archie Wilcox headed wide a corner, but Fareham did double their lead on 20 minutes when Ashley Tattersall slipped through Gary Austin who fired home under the outrushing Josh Carey for his 100th club goal.

It was three-nil on 25 minutes when a corner was played to the back post and was flicked back across goal by Keiron Clark, only to find the lurking Jack Breed who volleyed home into the bottom right corner; Fareham adding another goal just sixty seconds later to make it 4-0. Upon the restart Breed won the ball in midfield and fed Austin down the right side, the striker winning a fifty-fifty challenge with his marker before converting with relative ease past a stranded Carey into the bottom left corner.

Amesbury saw their first chance on the half hour as Sidney Miles drove harmlessly wide, but overwise it was one way traffic as Fareham made it five-nil just two minutes later. It came as a clearance found Josh Benfield who was brilliantly denied by Carey’s right foot, only for the rebound fell kindly to Austin; the striker making no mistake in confirming his hat-trick with a low strike into the net. And Austin continued to haunt the Amesbury defence as he added another goal just before the interval;  bundling home a low cross into the corner after good work from Cooper and Breed down the left to make it six-nil at half time.

To their credit Amesbury never gave up and got their reward as Fareham switched off on 49 minutes, which allowed Harrison Yeaton to race clear and shoot across home goalkeeper Henry Woodcock into the bottom corner to make it six-one. But the Creeksiders responded after efforts from Breed and substitute Ethan Jones, adding a seventh goal when Casey Bartlett-Scott smashed the crossbar; the rebound falling to Cooper who tapped home to add to his earlier assists from the first half before substitutions for both sides signalled a slight lull in the proceedings either side of the hour mark.

Amesbury added a second goal on 63 minutes with a near replicate of their first, a long ball releasing Scott Hassell who expertly dinked his effort over Woodcock inside the bottom corner to make it seven-two; whilst Carey, now playing in his natural striker position, dragged wide moments later as Fareham again suffered a lack of concentration. But the Creeksiders continued to push forward and scored their eighth goal when Benfield was fouled in the penalty area, Cooper sending the keeper the wrong way from the spot; Dan Bennett seeing three chances in a five minute spell before Breed calmly slotted home a ninth from an angle.

William Erdine then picked up the Amesbury goalkeeping gloves and this allowed Fareham to reach double figures on 81 minutes when Bennett got his reward for persistent efforts as he fired home from Cooper’s cut-back down the right side with a first time side-footed effort. It soon became eleven-two moments later when Archie Wilcox headed home a lovely floated corner from the left, whilst Jack Breed took advantage of a goalkeeping error and tiring legs as his looping shot was spilled over the line on 89 minutes; the referee ending the Amesbury misery by blowing the final whistle sixty seconds later without any additional time.

Combined with their seven-nil victory over Cowes Sport in midweek, Fareham now sit twelfth in the Wessex League Premier on 47 points and can overtake Hamble Club on the final day providing other results go their way on Easter Weekend. Pete Stiles’ team will now travel to new champions Hamworthy United next Saturday afternoon in Dorset, before playing the Wessex League Cup final versus Shaftesbury on April 30. This will be played at the On-Site Group Stadium, the home of AFC Portchester, with a 3pm kick off.

PICTURED BY FAREHAM TOWN MEDIA: Amesbury goalkeeper is beaten by attacking effort as home players celebrate one of their twelve goals in huge victory at Cams Alders on Saturday afternoon. 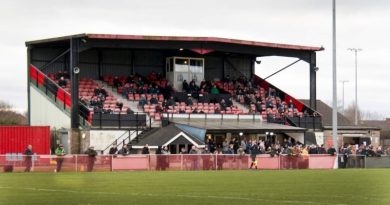 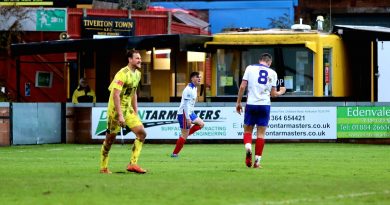 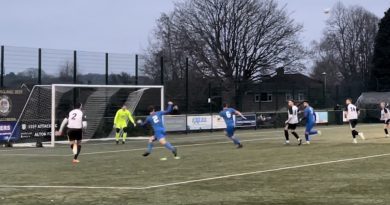