LAST Saturday morning the parents behind ‘Sophie’s Journey’ were forced to announce the death of their beloved 10-year-old daughter, who passed away after a 12-month battle with the rare cancer rhabdomyosarcoma.

It was a journey that claimed the attention of people across Hampshire and the wider community as they followed every update before last weekend’s heartbreaking news. But in the space of just seven days the region has come together in a series of special tributes of support for the family at a difficult time, while also ensuring that Sophie Fairall’s name won’t be forgotten as her legacy of awareness continues.

Before her death Sophie had been raising funds for Alice’s Arc, a childhood cancer charity with a particular focus on improving research and treatment for rhabdomyosarcoma. A crowdfunding page via JustGiving under Sophie’s Journey has been running throughout the campaign but has seen a rapid rise in donations since last weekend. At the time of writing, £62,000 has been raised and the target has been increased to £70,000, with nearly 3,000 supporters posting messages of support for the bereaved family.

In order to force change, an online petition has been set up by Sophie’s parents asking the Government to look at the statistic that only 3 percent of funding currently goes towards research and curing childhood cancers including rhabdomyosarcoma. It asks that more funds are made available so that families and children don’t have to suffer Sophie’s tragic fate. So far this has yielded just under 30,000 signatures since being made live five days ago, with 100,000 needed to force a debate in Parliament.

The story of Sophie’s Journey has also featured across the UK media, following attention gained from a bucket list that saw the youngster cook with Gordon Ramsey and visit the ITV This Morning set earlier this year. News of Sophie’s death has featured on BBC, ITV, The Sun, Independent and Daily Mail, alongside worldwide media including American and Irish newspapers. Closer to home, the Portsmouth News has carried a range of articles about Sophie’s Journey, while her parents have appeared in interviews on BBC South Today and ITV Meridian during the past seven days.

Sport across the region has also paid tribute to Sophie. Portsmouth FC inviting the family as guests of honour to their midweek league clash with Plymouth. They were presented with a signed football shirt reading ‘SOPHIE 10’ and a cake to mark a family birthday on Tuesday night. And the game was stopped on 10 minutes for a moment of applause that united all fans, players and coaching staff. At the same time a photo of Sophie was displayed on the big screens at Fratton Park, with the Spinnaker Tower turning yellow a day earlier in tribute. Gosport Borough also held a minute’s applause on Wednesday night when they played Sholing, with everybody at Privett Park participating in the emotional tribute.

Fareham Town further dedicated their midweek Hampshire Senior Cup clash with Alton to Sophie, decorating Cams Alders with ribbons and balloons to celebrate her life. Home players also wore a specially-made yellow change kit for the game, which featured a photo of Sophie on the official programmes and a minute’s applause before kick-off. This followed a similar moment of unity last Saturday in the aftermath of the announcement. All money raised from Tuesday night’s encounter will be donated to Alice’s Arc once it has been added up by the club.

Social media has also paid tribute to Sophie, with many users changing their profile images to a yellow ribbon last weekend. Others have stated their pride in supporting the charity Alice’s Arc in memory of Sophie, which includes runners taking part in the London Marathon next Sunday (October 3). An Easter event for 2022 will see local residents completing a 10-kilometre run, walk or cycle following a similar event earlier this year, with Sophie designing the medals to be handed out in Stubbington on April 10.

Further events are currently being planned in memory of Sophie and to raise further funds for Alice’s Arc, with the family still providing updates on the social media blog. Details will only be released once everything has been finalised and the time is right for large scale gatherings, such has been Sophie’s impact on the entire area and indeed Britain.

Borough councillors face up to each other 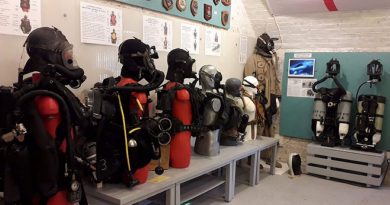 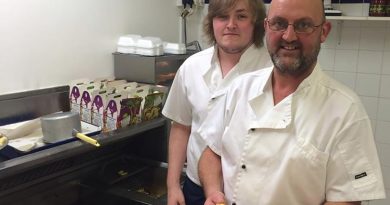 Chippy out of the frying pan and back to the fryer