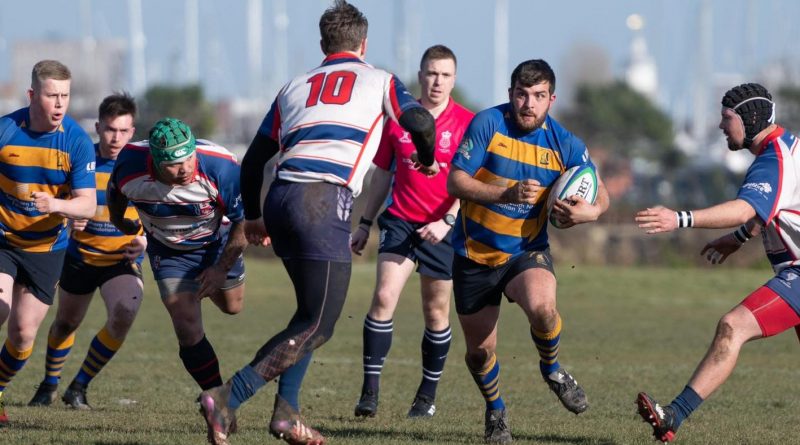 GOSPORT & FAREHAM RUGBY FOOTBALL CLUB (GFRFC) continued their recent resurgence with their second straight Hampshire League Premier victory on Saturday afternoon, beating their Isle of Wight rivals Sandown & Shanklin 48-21 in a thrilling encounter at Dolphin Crescent. And in sunny but chilly conditions the hosts scored multiple tries including three by Rob Ellis; who scored another hat-trick to add to his treble against New Milton & District in their league match last weekend.

After a cagey start in which both sides cancelled each other out, GFRFC scored the first try in the 14th minute of the afternoon with their first foray into the away twenty-two. Following a scrum the ball was worked out to Ellis on the right and the attacker made no mistake in piling over; Dominic Holling adding the conversion for 7-0.  Just three minutes later the hosts scored another try as Dominic Philo crossed in the corner with the conversion making it 14-0 on the nineteenth minute.

However fourth place Sandown & Shanklin weren’t pushovers and they added their own try down the other end as their winger touched over the line; the conversion easily kicked over by their kicker from an angle. But on the 23rd minute GFRFC sealed their third try as Iain Grice avoided two tackles before placing in the try-area, the angle of the kick being too tight for Holling to convert as the score became 19-7 with the occasional breeze not affecting the hosts’ attacking movement.

And just before the half hour a bonus point was secured as Philo finished off an incisive team move under the posts, Holling adding the conversion from twenty-two yards with relative ease. The kicker also added a penalty on 37 minutes following a quiet spell, which sandwiched one yellow card for each time as Simon Trivett was sin-binned for an unknown defence; the match referee blowing for the break with GFRFC winning comfortably with a 29-7 scoreline against their visitors.

Similarly to the first period it was a slow start to the second half with scrums and great defensive efforts stopping any changes to the scoreline until the 53rd minute; Ellis collecting an off-load and charging through the backline to score the hosts’ sixth try of the afternoon as the kicker missed the conversion from an angle. But Holling did slot through the posts just after the hour, converting Ellis’ third try after the home player had piled over from a scrum awarded after a knock-on was penalised.

Tactical replacements were made for the visitors who were tiring at 41-7 down, the hosts hoping to add more tries to boost their points difference with space opening up in attacking areas. Instead the opposite happened and GFRFC were put on the back foot as the visitors scored two tries in quick succession through their brilliant wing-play that caught the home defence off guard; the kicker adding the conversion on both occasions to cut the lead to 41-21 with just eight minutes left.

As expected, this away resurgence was too little too late with GFRFC denying any further points on the board in the final minutes; adding their own seventh and final try on 79 minutes with the last notable action. It came as a series of quick passes pulled the backline in different directions, allowing Will Larkin to run behind and dive under the posts with another conversion from Holling making it 48-21. This was how it stayed despite another sin-bin for the hosts as Jordan Carter was shown yellow.

Clinching all five points on offer means GFRFC stay second in the table and sit nine points behind unbeaten Havant IIs, which may be a task too big to overcome with just four games left to play this campaign. The final run-in begins for Mark Pollard’s team starts against Ellingham & Ringwood on Saturday afternoon (March 5) before a trip to Alresford the following week. Another two week break is then ended with games against Fordingbridge and Locksheath Pumas as the season is set to conclude on April 2.

PICTURED BY MARTIN BURNETT: Concentration as home attacker looks for space against Sandown & Shanklin defence in thrilling afternoon of rugby at Dolphin Crescent on Saturday afternoon.