GOSPORT residents and other interested parties will have the opportunity to discuss the plans for Priddy’s Hard at a meeting being organised by Gosport Heritage Open Days.

As reported in The Globe, the GHOD meeting – at Elson Community Library & Hub starts at 6pm on Wednesday, April 20, – will explain the plans and hear people’s views about this year’s Heritage Open Days scheduled for September 9 to 16th.

The guest speaker at the event will be Hannah Prowse who succeeded Peter Goodship as the chief executive officer at Portsmouth Naval Base Property Trust in May last year.

Peter Goodship started PNBPT’s renaissance of the 30-acre Priddy’s Hard site and the first development phase has included the regeneration of the ramparts and seven listed buildings which now house the Coastal Forces Museum, a micro-brewery, pub restaurant and holiday let.

GHOD’s Vice Chair Peter Cardy told The Globe that Hannah Prowse will be talking, “about the history of Priddy’s Hard, what has happened since it closed as a munitions factory, and plans for the future.

“Most people know the Explosion! Museum and the Powder Monkey Brewery, but may not know that there are around 20 other historic buildings on the site, most of them unused.

“Hannah is keen to hear views from Gosport people about the best way of opening and using these buildings, while protecting the history they embody.”

At the meeting there will also be information about the ‘Astounding Innovations’ theme of this year’s Heritage Open Days in Gosport.

One invention that is likely to feature large is the ‘Gosport Tube’ – developed in 1917 by Robert Raymond Smith-Barry when he was in charge of No.1 (Reserve) Squadron at Grange airfield – which enabled trainers and trainees to communicate above the noise of the aircraft’s engine during flight training.

The Globe understands that GHOD is exploring the idea of holding workshops and other ways of celebrating Smith-Barry’s device which was in use until the 1950s.

More than 220 volunteers took part in last year’s Heritage Open Days in Gosport and the organisers want even more involved this year.

Extending the open invitation, Peter Cardy said: “There is no charge for attending the meeting, but to enable us to plan seating and refreshments, please let us know you’re coming by emailing info@gosportheritage.co.uk or phoning 07531 001003.” 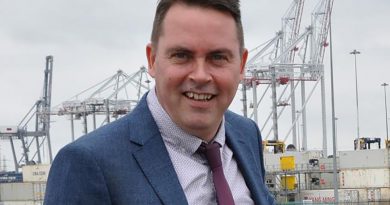