Plans to ensure people with Down’s syndrome get lifelong care have passed the first hurdle on the way to being law in England.

MP Liam Fox said his Downs Syndrome bill was needed now because people with Down’s syndrome are starting to outlive their parents.

The Tory former minister said it would “lighten the burden” on parents who worried about what would happen to their children after they died.

The legislation has government support and is therefore likely to become law.

On Friday, MPs approved the bill at its first stage, known as the second reading.

It will now be considered by a committee of MPs and, if approved by both the Houses of Commons and Lords could become law by Spring next year.

Stain on our country

If passed, it would place a duty on authorities providing health, care, education and housing to assess and plan to meet the needs of people with Down’s syndrome.

It would also force the government to provide guidance to on how it can better accommodate people with the syndrome.

Ken Ross, from the Down’s Syndrome Policy Group, told the BBC that at the moment getting the r 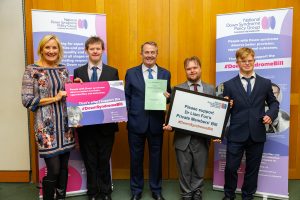 ight provision – such as securing the right speech support in schools – can be difficult.

He said the bill would mean people will “have to think about how their practices can be adapted to meaningfully include people with Down’s syndrome”.

Speaking in a Commons debate on his bill, Dr Fox said: “When I was born the life expectancy of someone with Down’s syndrome was 13 years by the time I became a junior doctor it was 30 years, today it is 58 years.

“We have people with Down’s syndrome living into their seventies.”

He argued that it would be “a stain on our country and a scandal” to see “in future those whose parents have died being placed in inappropriate institutions, in elderly care homes or mental health institutions.

That would be something that I think would bring shame to our country as well as an utterly inappropriate lifestyle for those to whom we should be giving the best possible care.”

He said his legislation would not be “panacea” but would be a “vital step forward”.

Responding to criticism that people with Down’s syndrome were already protected under current laws, Dr Fox said many of the 47,000 who have the syndrome were not getting the help they needed.

Conservative MP Sir Charles Walker said the services on offer were “fragmented” adding that it could be “exhausting to navigate these specialist services”.

Labour’s Meg Hillier said the bill was “just the beginning”, with “a lot of heavy lifting” left to do and she urged the government to set targets on improving outcomes.

DUP MP Ian Paisley described the proposed legislation as “world-leading” and said it would make people with Down’s syndrome “equal under the law”. 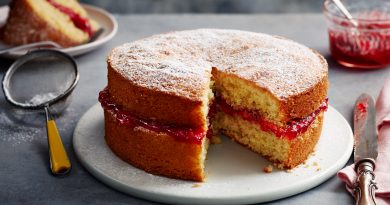 Maternity solution for children and fitness